On a scorching July afternoon, a little over one month ago, we said goodbye to our Brooklyn home. It was emotional. Bunky cried in her room and I cried, privately, in mine.

Me and my girl in front of our Brooklyn apartment.

Though imperfect in many ways, our small apartment was home. It’s the place where Bunky was diagnosed, where Little Guy grew silently in my belly. I labored in our room, smothering my moans so as not to wake our restless girl. It’s where we brought Little Guy home, and where we grew, as a family, for three years. Goodbyes are tough for me. But you probably know that already.

Leading up to our departure I was a ball of anxiety. There were complications with the closing of our apartment and new home, worries about transitioning from the familiar to the unknown, and frankly, I was freaking out about having both kids all day with no breaks to speak of (re camp). I reminded myself about the golden days at the lake last summer, digging tunnels and castles with moats that didn’t get washed away by ocean waves.

But this year the weather didn’t cooperate. Instead of having a mild but warm season, it was strangely cold and rained a ton. (The above picture was a lovely exception.) Some days didn’t rise much over sixty degrees. The bugs were thick as always, but Little Guy developed a fear of them and screamed every time a gnat or fly whizzed by. Which is pretty much about every two seconds. Sigh. All I have to say is thank goodness for the local library and cable TV. (Except for when the rain washed away our satellite signal.)

I’m aware that this may sound rather complainy. Oh, poor us, miserable in our country home because of some rain and bugs. But anyone with kids (or at least a vivid imagination) can imagine that being isolated in the woods with a couple of bored and bickering children (not to mention bickering parents, ha) after leaving a much loved home and not yet having settled into a new one could be a bit…trying.

There were highlights of course. Some days we made it to the lake and dug like gophers.

My outdoorsy girl, in the stream.

And the Forestburgh Playhouse’s version of Beauty and the Beast was fantastic, the kind of show that is entertaining for kids but also amusing for adults. Bunky LOVED it and Little Guy managed to sit through a good two-thirds, which is a huge improvement from last year’s five minutes. We also had a very successful trip to Sneaker World and picked up these suckers plus some dollar store school supplies. 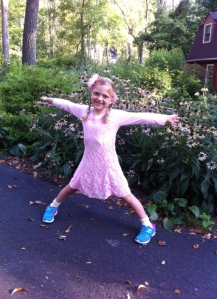 Beginnings are bittersweet. Saying goodbye to the old and welcoming the new. And now, on the cusp of all this change, another goodbye looms near.

My father’s beach house, which saved us this summer from several cold weekends upstate, is to be sold as well. This has been a long time coming, which has given me the time and space to process all the mixed emotions. I’m relieved for my father, but sad to let go of the memories that live within the walls. And on the walls. 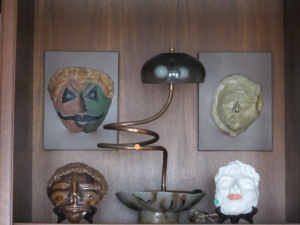 Some of my mother’s masks, made before she lost the use of her hands to Multiple Sclerosis.

This is the house where my mother died.

This is the house we came to a week after Bunky was born. It was Mother’s Day and my heart was leaden with grief at my own mother loss.

Last week, before the rush of Labor Day began, we said goodbye to the spacious rooms that held my family with reverence and love during the eight-day vigil of my mother’s death. We said goodbye to the rooms where my babies nursed and cooed, and then later, ran and played, danced and sang amid pictures of my smiling mother as a young healthy woman, with walls and shelves decorated with her beautiful pottery. And of course the beach, where the sound of waves soothed the pain of my seven years without her.

Me pregnant with Bunky. My mom’s portrait snuck in the frame. Her pottery, too.

My husband says the best time on the beach is dusk. I agree though I’m also partial to early morning, but there is something magical about the hour before twilight. Everything is softer.

Recently the sand near the ocean shifted, creating a ledge that dropped several feet. The kids loved digging into it, making stairs, walking up, sliding down, and jumping. One evening, my husband and I both stared at each other in surprise after our normally cautious daughter took a running leap and flew off the edge. She popped up at the bottom beaming with pride. I felt the usual words bubbling up my throat, the awful and meaningless be careful. I clamped my mouth shut and let her jump and jump and jump.

So much of my time is spent trying to prevent harm. Makes sense. I’m a mother, after all – a totally neurotic one. But sometimes you have to let go. You have to let your kid leap off the ledge. Maybe they don’t always fall perfectly. They may sprain an ankle, twist a knee, or land on a sharp shell. Or maybe not. Maybe they jump and fall and get up and jump again, coming up smiling.

Sometimes, you have to leap off the ledge. You have to trust that you will land. And maybe when you do, you’ll find some unexpected treasures. 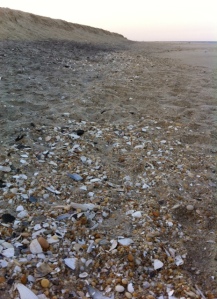 My father came along one early evening and I saw the fear and worry cross his face. We are, after all, related. I put a hand on his arm and told him it was okay.

And together we watched her jump and jump, and fall and land, radiating with joy and pride as the sun set, turning the sky and sand the most gentle of blues. 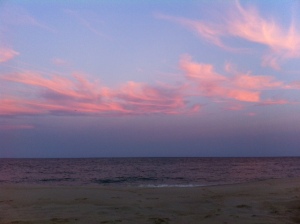 Here’s to endings and beginnings, and everything in between.

5 thoughts on “Leaping off the Ledge”