Anniversaries are milestones; they represent time passing. It’s hard to believe that it’s been a year since Bunky’s celiac diagnosis.

A year ago in April we looked at our daughter’s pale, drawn face and (finally) realized something was wrong. The bones of her cheeks jutted out sharply, the curve of her chin chiseled down into a point. A bony unhappy heart shaped face. Circles darkened the hollow space beneath her eyes. 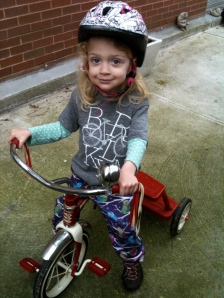 B has celiac, but we don’t know it yet.

Her body had also changed dramatically over the winter months. I thought she was just “thinning out” – what did I know? Nothing apparently. Toddler bodies do thin out, but they don’t become emaciated and wasted. Toddler bellies do tend to bulge, but they should be soft to the touch, not hard and distended. It makes me want to cry writing this, even a year later, with a now healthy vibrant daughter with strong long limbs and a full rounded face. But a year ago I missed all the signs. My husband did not. He noted her belly and weight loss with cautious concern while I waved away his worries. “Oh, she’s fine,” I’d say, “She’s losing her baby fat.”

But then spring began and a stomach bug that caused incessant and painful bursts of diarrhea persisted beyond three weeks and my husband put his foot down. “Something is wrong,” he insisted. “Let’s call the doctor.” I started to spout my old mantra, the “everything is fine” mantra that I inherited from my father, both of us deniers of illness, which is ironic since my mom, his wife, had a severe and undeniable disease, multiple sclerosis, that ultimately took her life. Maybe it was because of that undeniable disease that we both railed against deniable ones, things like stomach bugs and thinning limbs, everything is fine, we insisted, but it was NOT.

I remember strolling her home after a failed attempt to go to music class. She slumped unhappily in her stroller as I chirped ideas from behind. How about the bookstore? The playground? She clutched her stomach. Her voice was small and quiet. “I feel sad,” she said. I stopped and knelt beside her. It was the “I feel sad” that made my own stomach drop. Something was wrong, and my poor dear girl who was just a few days shy of turning three, was attempting to translate her pain and discomfort by telling me how sad she was.

It broke my heart.

I called my husband and told him, “Maybe we should call the doctor.” Even though earlier I had dismissed the idea, saying they would tell us it was just the stomach bug that was going around. “Call them now,” he said.

We called, we went, and our usually low key “everything is normal” doctor sent us straight to the ER. Needless to say we were terrified. After an excruciating afternoon of tests they sent us home with no answers, other than the relief that it wasn’t a tumor or anything life threatening, and the recommendation to see a gastroenterologist, which we did and then shortly after that received our diagnosis: celiac. A word that moments before barely meant a thing, now was leaden with significance. It was a life long diagnosis. It was a disease.

The ER trip happened the day before my daughter’s third birthday. At her party her two best friends ate up the homemade sugar cookies with pink raspberry frosting, which Bunky refused. She perked up to play with her pals and ride her bike, but wouldn’t eat much of anything. It was sad to witness. Days later we knew why. All the food we offered her – bagels, crackers, and cookies – GLUTEN – was making her sick. Her little body didn’t want to eat anything, because nothing felt good.

The day we found out about her celiac we cleaned out our pantry of all things gluten and went food shopping, informational print outs clutched in our hands. To say it was challenging those first days, weeks, is an understatement as anyone newly diagnosed will tell you. But the day she stopped eating gluten, her diarrhea stopped – this after three weeks of up to eight times a day – and within weeks the spark returned to her eyes, and nutrients and fats filled her starving body, giving her bursts of energy and a glow we hadn’t seen in months.

Now a year later, I can scan a grocery store in minutes and pick out our favorite GF items without batting an eye. I am confident reading food labels and preparing healthy meals for our family.

Looking so happy and healthy in April 2012

There’s always a but, right?

I think our first year was mostly survival. Our priority was getting Bunky healthy while learning everything we could about celiac and the GF diet. All this occurred right at the start of my pregnancy with our second child. There were days we forgot I was pregnant because we were so consumed with our daughter.

Then in the fall, preschool began and along with some major separation anxiety (it was her first drop-off program) we also had to contend with food concerns and soon-to-be-new-sibling issues. In November little guy arrived and life got even more complicated.

Now, six months after his birth, I have come up for air. The celiac anniversary came and went without fanfare, certainly without celebration, but leading up to it I felt the stirrings of a sadness I didn’t have time to feel during our rollercoaster year.

Yes, I’m grateful that B was diagnosed quickly with a disease that has a cure !! No medications, no operations, just a GF diet. How wonderful, truly. But – there’s that pesky word again…

But I’m sad that she has a life-long illness. One that we – and she – will have to monitor daily. Eating is not just functional. Food is SOCIAL, the center of pretty much everything. Birthday parties, holidays, family gatherings, school functions… and that’s just what we’re dealing with now at age four. What about during adolescence and beyond? Pizza parties? Sleepovers? Camp? What about going on dates? Parties? What about BEER?

Oh forget it. I can’t think that far ahead.

Right now birthday parties and family gatherings are hard enough. Refusing people’s offers of unsafe food, pushing away a tray of gluten pretzels from my daughter’s roaming hands, providing her with a different cupcake than all the other kids at birthday parties.

Exclusion – it’s hard to see it happening already at such a young age. I wonder if some of her social anxiety is tied up with eating differently than her peers, of having to be careful NOT to share.

Ultimately, I believe these things will make Bunky a stronger, more empathic person, but it won’t come without a price. Sadness, confusion, anger, and who knows what else. Normal emotions to be sure, but hey, sue me if I’d rather wait a few years for those feelings to come with such frequency over the seemingly mundane: food.

I honestly can’t watch another kid stuffing their face with a gorgeously frosted cupcake without thinking that B will never be able to do that, at least not without planning ahead.

But – and here’s where I force myself to look at the glass half full, something I’ve always had trouble with – I’ll deal with all of that if she stays healthy, and I’ll help her deal with it too. It won’t be easy, and some days it might make me cry (privately) and it might make her cry (not so privately) but we’ll work through it together.

Because this is our life, now.

23 thoughts on “One Year Anniversary”