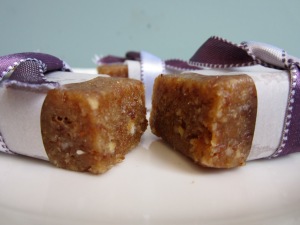 It’s been a rough week here, at least on the domestic front. Um, wait, that’s really the only front for me.

On Monday we took Bunky to the doctor where she tested positive for strep and the whole family got a turn getting swab sticks jammed down their throat (fun!). Luckily the rest of us were in the clear, but man, is that test awful! I think there’s something to be said about (occasionally) having the same stuff done as your kid because the empathy really flows. Like when I got the whooping cough vaccine while pregnant with Little Guy and my arm ached for days. Too often, I think we encourage kids not to dwell on the (many) hurts that they have to endure throughout their childhood, mainly for our benefit (re: less whining) but the truth hurts, literally, and sometimes it’s good to be reminded of that.

So this meant no school Monday or Tuesday. Little Guy has never watched so much TV in all his short life and he was pretty thrilled. Which just means I’ll have two kids screaming for more shows soon enough. Sigh.

We tried sending her to school on Wednesday, but a few hours later I got a call from the school nurse (the first of many, I’m sure) saying she threw up. Poor kid! Maybe it was the antibiotic, but it could have been a stomach bug because she was a total wreck all day. Thank goodness she’s feeling better today, though she’s still at home recovering, i.e. watching more movies.

Speaking of which, have you seen the Lalaloopsy characters? Totally creepy button eyes, but Bunky loves them. At least they’re not mean like the Strawberry Shortcake girls, or vapid like those awful My Little Ponies, sheesh.

In between shows and vomiting and snuggling, I managed to make these Banana “Bread” Lara Bar knock offs. And take pictures, though that didn’t go as smoothly since Little Guy got his finger caught in a drawer during my “photo shoot” and Bunky pitched a mini fit because I made her turn on all the lights (her dolls were napping).

But somehow I did it. Because I need these bars. You need these bars. They are easy to make and super healthy, which makes their addictive quality totally acceptable. I made mine without chocolate chips because Little Guy loves them too, but feel free to mix them in at the end, at the last pulse, or stick them on top like I do when he’s not looking. 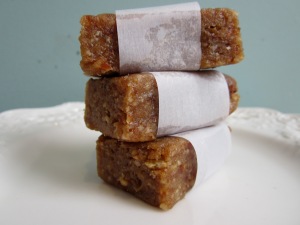 * If you don’t have freeze dried banana, which crumbles quite easily and is so so sweet without ANY additional ingredients, either sub in another 1/2 of a real banana, or 1 cup of banana chips.

Normally, when making raw bars like these delicious Cookie Dough ones, I’d throw everything in my food processor and zippity zap. But this time I decided to process each ingredient separately, partly because I really wanted to avoid making accidental walnut butter. Let’s just say there is a reason why they don’t sell walnut butter in stores along with every other nut. It’s gross. Poor walnuts, sad but true. Also, I need to make the nut pieces VERY small so Little Guy doesn’t choke. He loves these bars as much as I do. Maybe more.

After processing each ingredient separately (except for the 1/2 banana, which I smushed with a fork in a bowl) I put them all in the food processor together and pulsed briefly until the dough came together in a ball.

Everything processed separately and in their own bowls before blending together.

It would probably be fine to do it this way, too: Process dates (drain water first), nuts, and dried banana together until pieces are uniform and dough starts to come together. Add vanilla extract, smushed banana, and cinnamon. Pulse until it combines into a ball of dough. I’ll probably do it this way next time so I don’t dirty so many dishes.

Put it in the freezer for an hour or more to chill. Then cut into pieces, or just dig in with a fork. You can also roll the dough into balls and chill that way, too. This makes a great breakfast or snack. They get mushy at room temperature, so store in the freezer.

Here’s hoping Bunky makes it to school tomorrow. Next week is spring break and I’ll have another week with two kids. I really don’t know how we’re going to make it through the summer. Am I a parenting wimp or what?!

I’m happy to have shared this post at the Gluten-Free Friday’s link up party hosted by Vegetarian Mamma. Click the link to find more great GF recipes!

It’s also posted on One Creative Weekend, hosted by One Creative Mommy, and Simply Sugar and Gluten Free’s Slightly Indulgent Tuesdays. * Please note, that the recipes on these two link-ups will NOT all be gluten free, so be sure to read carefully.