Breakfast around here has taken a turn. And I’m not talking about a good one. Behold, the most beautiful rainbow of non-nutritive value… 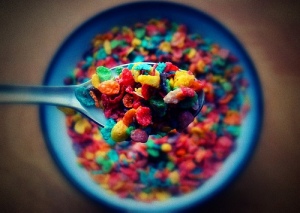 The prettiest picture of Fruity Pebbles ever.

Our yogurt pop breakfast dream was going strong for quite a while before things went downhill to Pebble land. Bunky was a trooper, eating the pops daily, with unwavering enthusiasm until the bitter end. When I noticed a glimmer of pop exhaustion, I threw in some peaches, experimented with pineapple, and used some raspberry sorbet as sweetener instead of honey, but in the end, the dream died. There are only so many fruit filled yogurt pops a kid can eat before they get tired of them.

How did this Stone Age oaf get invited to breakfast, you wonder? 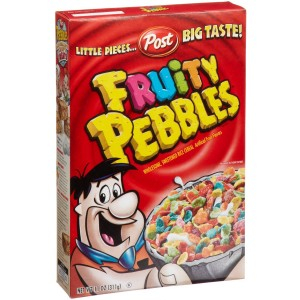 Before you mistake me for an anti-sugar cereal ogre, I will flashback to a heart warming story about my mom, of whom I have very fond memories regarding her lenient breakfast policies. She pretty much let us loose in the sugar cereal department, drawing the line at Cookie Crisp, which she was apologetic about, but unrelenting. My cousins, who were never allowed any sugary cereals, used to spend the night and wake up in eager anticipation and pure joy at our amazing bounty of cereal choices. Peeps, my lovely cousin, still talks about this decades later.

Now that I’m a mom and an avid reader of food labels (a most riveting post about this coming soon) it is sort of appalling because I know how bad and kind of gross artificial flavoring is for growing bodies, but to defend my mom, it was the 80s. That’s right. I’ve just used an entire decade as a defense. You read my bran muffin nostalgia post, right?

So even though I do not technically approve of the whole Fruity/Cocoa Pebble situation, I do not squash it because I know that doing so now, after it has already been introduced to an utterly thrilled Bunky, would be a futile battle. The better way might have been to avoid it until she knew enough to request it, but too late now. Thanks, honey (that was meant for my husband, though I can call you honey if you’d like).

The truth is, I am a closest Cocoa Pebbles eater, when pressed for sugar. I mean, it turns your milk into chocolate milk, which is pretty cool. Also, both cereals are gluten free (and nut free, incidentally) and for kids who are banned from nearly all pop culturally addictive cereals, there is some merit to this.

But I knew that it couldn’t go on forever, at least not on a daily basis.

{Addendum: I just found out about this post from Celiac Yoga Momma who did a nutritional and taste analysis of Cocoa Pebbles versus a “healthier” version and turns out the former is better for you, who knew?}

Drastic measures were needed in the yogurt pop arena. Fruity pops just can’t compare to Fruity Pebbles, alas, but I suspected I could work with chocolate, Bunky’s weakness…

And voila, the Chocolate Pudding Yogurt Pop (with a secret banana) was born! 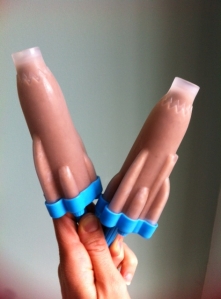 Throw everything in your food processor or blender and whirl away! Then fill pop molds.

I used 4 rockets and 2 stars for variety.

Freeze ’em up and enjoy. Don’t forget to use the dregs of the “batter” though, for a smoothie. I plopped in more yogurt, chocolate almond milk, almond butter, and ground flax = awesome mom breakfast, which I generously shared with Little Guy, my pop + smoothie partner in crime. 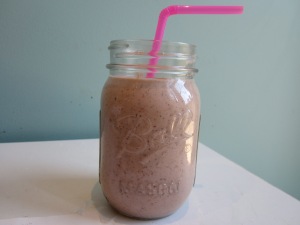 He’s totally getting the hang of eating the frozen pops, too, which is super cute. Here he is, enjoying what might have been the final fruity pop, with his sister and my dad, who we call Greedles.

The family that pops together.

I’m happy to have shared this post at the Gluten-Free Friday’s link up party hosted by Vegetarian Mamma. Click the link to find more great GF recipes!

It’s also posted on One Creative Weekend, hosted by One Creative Mommy, and Simply Sugar and Gluten Free’s Slightly Indulgent Tuesdays. * Please note, that the recipes on these two link-ups will NOT all be gluten free, so be sure to read carefully.