Let’s talk about safety. First priority in the country – avoid being mistaken for an animal. Especially during hunting season.

Which is why we bought these lovely neon hats. The pumpkin is wearing it, which takes away from its extreme orange-ness, but believe me when I say no animal in the woods is this color. 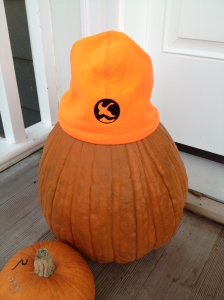 Our big pumpkin will not get shot.

Bunky also has a fantastically bright magenta coat which no creature in nature shares, so I’m pretty sure she’ll be safe. In addition to her orange hat.

The place we bought the hats a few weeks ago is an enormous Home Depot-sized outdoors store called, Gander Mountain. In addition to guns, fishing poles, cozy looking hunting shelters, and many (creepy) mounted animal carcasses, they also sell hiking and snow boots, which is what we were there to buy.

Usually I spend most of our money on overpriced GF groceries, but this time I got to splurge on some quality snow boots. I almost bought ones called, Joan of Arctic, and probably should have because of the name (and better price), but decided on a more expensive pair, Cate of Alexandria. Who is that? No clue. That should’ve tipped me off, but vanity got the better of me and I got these Sorel boots instead. For the record, they were not as expensive as listed on the site, but still. Oh well. At least my feet and legs will be warm and fantastic looking. Bunky got cool boots too, for a much more reasonable amount. 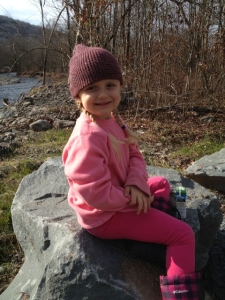 After this longer than intended stop, we were all starving. We BOOFed (bring our own food) of course, but to be honest, how many Udi’s sandwiches can one family eat? Especially outside on a damp cold day in a parking lot which happens to overlook a Perkin’s Pancake restaurant. I have to admit feeling a twinge of sadness at not having the option to pop into a place like that for a warm meal. But there are no, or very few, safe options for us. Until a GF diner opens – entrepreneurs take note – it’s Udi’s on the road for us.

Lately there hasn’t been much going on in the nearby towns during our country weekends. We had been spoiled early on since our visits coincided with fun events like a Halloween festival, pumpkin picking, cider mills, and craft fairs. 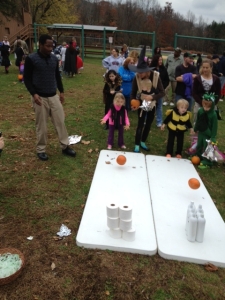 Bunky bowling with a pumpkin. And yes, those are toilet paper ghosts.

The truth is I think we need to stop trying to find “stuff” to do, and simply enjoy the house and nearby nature spots. Have I mentioned that driving anywhere in the country takes forever? Not cool with two kiddos. Unless they are sleeping, they are not exactly what you’d call amiable passengers. 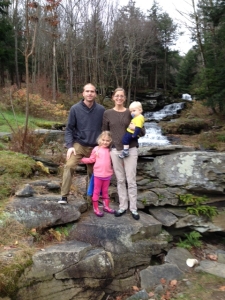 In front of the falls at the cider mill. Lovely, right? The ride there – not so lovely.

That weekend we ended up finding a sweet little country store where I bought vanilla bean soaked peaches – yum. Both Bunky and Little Guy rejected what I thought would be a sweet treat.  Now the whole jar is mine, all mine! 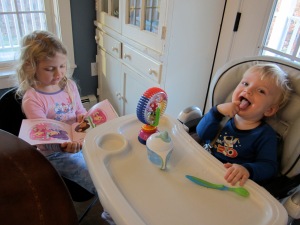 B reading a book to LG at breakfast after rejected peach tasting.

Their loss is my gain. I’ve been enjoying them diced in my oatmeal with a dash of maple syrup. 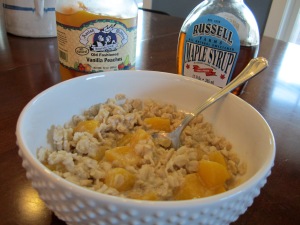 Every Sunday there is a lovely farmer’s market by the river (in the warmer months) and indoors during winter. But it’s a good 45 minute drive from our house. We went once and it was great, but I can’t see going regularly unless we’re in the area for something else.

Our farmer’s market bounty a few weeks ago.

Ultimately, Bunky is happiest hanging out at the river with her dad, collecting rocks and exploring. There is no need to drive searching for something “to do” when we can walk outside our door, or drive a little ways down the road to the river and make stone towers. 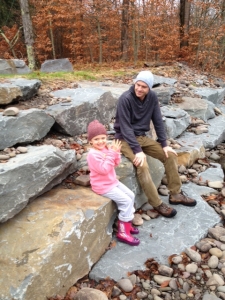 I mean, isn’t that why we bought a house in the country? We don’t need to track down events. Our girl is thrilled to stack rocks, look for newts under logs, and soar through the air on her homemade swing.

As we move deeper into December, and closer to winter, we’re hoping for more snow so we can enjoy some easy and fun play right outside our front door. Snow in the city quickly becomes slushy and stained (let’s not talk about with what). Country snow means clean snow, with potential for forts and snow angels.

The other great thing about winter? Hibernation. Though we haven’t seen any bears, and nor have our neighbors apparently, it’s nice to know the ones that might be around are hunkered down for the season.

I still might wear my orange hat, though. Just in case.