I’m not talking about skipping out on gluten because Gwyneth Paltrow is doing it, or worse, Miley Cyrus. Or even because your doctor suggested you try it out (get tested for celiac why don’t you). If you think gluten is making you sick it seems obvious what you should do. Less obvious is what you should do if it’s happening to someone you love.

When Bunky was diagnosed at age 3, it was a no-brainer to eliminate all the gluten from our home. It made sense logistically and realistically, but also emotionally. We didn’t want our daughter to feel different at home. That would happen soon enough out in the world.

It was also clear that we would not eat gluten in front of our daughter. Duh. I couldn’t imagine not being able to share food with my girl. My husband took it one step further and decided to forgo gluten entirely. If Bunky can’t eat it, I won’t either, he said. Though his own health was a factor, I think he would have done it anyway. He’s that kind of guy.

My girl and my man snuggling before celiac.

So what about me? My decision wasn’t so cut and dry. To be honest, I wasn’t ready to cut out gluten entirely. To be more honest, I’m still not.

I know different families who do it all kinds of ways. Some people have two toasters and carefully marked G and GF items in their fridge. Some have totally G free homes, like us. Some swear off gluten forever, others just don’t eat it in front of their kids, like me.

There is no RIGHT answer. It just has to feel right to you.

Ultimately, a year and a half into my girl’s diagnosis, even with B at school every day and with the whole glutinous world at my fingertips, I still don’t eat much G.

Every now and then I get a bagel and cream cheese, my most missed gluten food group (sorry Udi’s, but I live in NYC, it’s like bagel city here, it’s not your fault), but when I’m out in the world, even without my girl, I usually go GF. Out of habit, mostly, but there is another G factor – guilt. I feel less of it than I did in the early days when I scarfed down G on the sly. Back then it often felt wrong, like I was sneaking around behind my kid’s back. 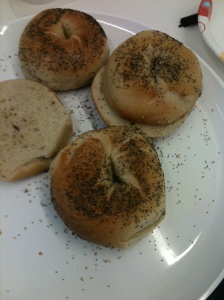 Gluten bagels at my husband’s job. Temptations every day.

My friend whose son and husband have celiac likens it to a bizarre eating disorder. I remember being at a kid’s birthday party and inhaling a slice of G pizza with my back to Bunky because I didn’t want her to see. It was one of my few “rule breaking” moments with her. She was too busy enjoying her own Udi’s pizza to notice, but it still made me feel crappy.

For me, eating gluten solo or even with Little Guy is not as enjoyable because I can’t share the experience (i.e. food) with my girl or my man. Food is communal, it brings people together, and this is a huge part of what makes being GF so challenging, because it affects people on a social level. Food is part of every facet of life, from sharing everyday meals with family to special occasions like holidays, festivals, and birthday parties.

I’m already stressing out about Thanksgiving, the biggest food holiday for me. Last year we left my husband’s aunt’s home before dessert. Partly because we had a new baby, but also because there was NOTHING for us to eat. Thanksgiving with no pie is just wrong.

Not this year. Since I no longer have a brand new baby, I’ll be cooking up a storm to make my husband and daughter feel included at the Thanksgiving table, dessert included. Pie, brownies, cookies galore. Those gluten eaters will be gobbling up my goodies and I’m sure saying things like, oh wow this is really good for gluten free, which will make me cringe but hopefully I’ll remember to be gracious and just smile and nod. They will probably offer me the G items and I will decline as I always do. I will only eat what Bunky can eat, and so will my son.

Because we are a family and that’s how we roll. 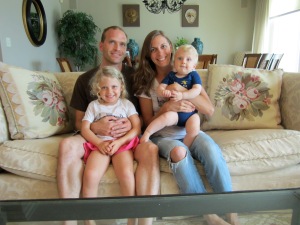 How do you handle the G conundrum, if you don’t have celiac or a gluten intolerance? Is your household gluten free? Do you feel conflicted at times about your decision?

This post is just the tip of the iceberg. I have lots more to say on the subject as you can imagine. Coming up soon, how to deal with Little Guy eating gluten…

4 thoughts on “To Be or Not to Be Gluten Free”